In 2014 I ran the Thames Path, from the source to the barrier. By myself. Carrying my own stuff. In 2016 I ran the North Downs Way. This time dragging my husband with me. Carrying all our own stuff.

The reason I got a running coach lurked at the back of my mind – I wanted to run from Land’s End to John O’Groats with the 2XU LEJoG event; a road race averaging 50 miles per day. I’m not a fan of relying on other people, nor of running along major roads with the constant fear of getting splattered all over the tarmac by a passing vehicle. That, plus being slow and preferring running on trails, meant that when I had the opportunity to take some unpaid time off work this summer I decided to run LEJoG. By myself. Carrying all my own stuff.

It was always going to be mostly about problem solving, largely because the route I was basing mine on was written in 2012. Footpaths and rights of way fall into disuse, plants grow and farmers stop caring because the paths aren’t being used. The first night, I had a packet of pork scratchings for my dinner because the pub chef had just quit and there was nothing else for miles around. Problems were all solvable with a little rerouting, clambering over a hedge or fence, being hungry for a while, and the odd shredding of arms and legs, pushing through thick, spiky vegetation.

I was prepared for rain and had good waterproofs, but I wasn’t prepared for having wet feet for 10-12 hours of the day. They got macerated and I didn’t notice any damage until it was too late. That, on top of the frequent rerouting, ducking under electric fences/over barbed wire, running away from homicidal cows, shredding by brambles and nettles etc., took me beyond my limit. I had my first six-hour meltdown; I was mentally exhausted. This would have been the end of it, but for my husband who came to see me for the weekend. I agreed with him to take a rest day rather than give up and call myself a failure.

Setting off again, the days were emotional rollercoasters. I dreaded mornings and wet vegetation soaking my feet before I’d got more than a mile into the day, but my feet slowly got better and I got further into the day before they hurt. Every day was about getting to the next point with limited damage. I was so down in the evenings that I barely managed to summon the energy to get dinner sometimes. Then there would be glorious scenery, a million bunnies or other wildlife to gawp at, albeit briefly.

The penultimate day in England was uneventful until something happened to my ankle and it got increasingly painful. Things felt OKish as I made tea the next morning, but when I set off I got stabs of pain. Hours of stop, start, sobbing, re-routing and frustration but I made it to the Scottish border, then my hotel for the night where the owner drove me to the local GP. The verdict was a sprain and needing a couple of days off.

After a two-day break, I was into “one day at a time” territory. Four hours into day twenty-one, things got excruciatingly painful and I was reduced to a hobble. I swore and bawled my eyes out again with frustration but I managed to make it to the next stop.

Another 5am start the next day, height gained and glorious views. Then came downhills and grinding to an impossibly slow hobble as I howled in pain for two long miles. By chance I came across a local health centre and they packed me off to hospital where I got a diagnosis of tendinitis, a pair of crutches, and instructions to take anti-inflammatories for at *least* a week. Clearly my ankle wasn’t going to even start getting better unless I gave it a chance. Drugged to the eyeballs with painkillers I couldn’t cope with downhills. I had to stop.

I went home and spent the next three and a half weeks recovering and finding a way to finish the job.
Starting back, everything was exactly what I’d been waiting for – exciting navigation, tricky ascents, narrow paths that clung to the sides of steep drops, rocky and technical descents (try that with 9kg on your back!), fording fast rivers up to waist deep. Glorious! Of course, now I was 3/4 through the route I had a hot spot on the inside of each heel. I taped the one that felt sore, but by the end of the day the tape worked loose and I lost some skin. Over the following days I cleaned up my feet, applied tincture of benzine and then taped them up. I had raw, open wounds and putting on shoes each morning really hurt.

Finally, I hit the Highlands, but the days were eclipsed by bawling my eyes out for a couple of hours because my feet hurt so much. By day twenty-nine I’d been crying so hard my throat was sore. Then they slowly started to become less painful each day, but I was exhausted physically and mentally.
Sadly, the last couple of days had uninspiring landscapes and the people I met were often surly, mean and lacking in humanity. I couldn’t get to the end before my husband because he wanted to be there when I finished, but the road was smooth and my feet were healed enough that hiking didn’t hurt much so I had to consciously slow down.

At first I couldn’t see the John O’Groats finish sign but once I’d figured out where it was, I broke into a run. And my husband appeared for a celebratory hug. I’d run over 1,000 miles, mostly cross-country! By myself! Carrying all my own stuff!

For more from Kate.

"I was prepared for rain and had good waterproofs, but I wasn’t prepared for having wet feet for 10-12 hours of the day" 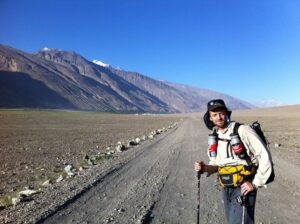 Q & A with James Bingham

Last updated: 15-Nov-18 By Luke Jarmey We love hearing tales of ultra running accomplishments, and even more so if there happens to be a bucket 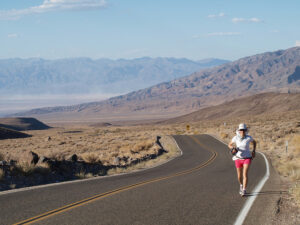 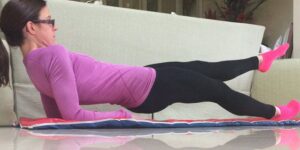 What are the best exercises for a hamstring injury like PHT?

Last updated: 07-Dec-16 By Karina Teahan Usually when we think of hamstring injuries we imagine a footballer or sprinter suddenly pulling up from full speed

The journey to the Arctic Marathon began when looking for a marathon that my wife and I could run to celebrate her 50th birthday. I found