Racing During a Pandemic USA Style

As the Corona virus continues to spread throughout the world; with varying degrees of lockdowns, shutdowns, curfews and regulations, it’s likely that many of us have not had the race year that we had hoped for in 2020. In the US, with nearly 15 million confirmed cases and rising there is one race company (among others), speaking from a US perspective, that has lead the way on how to hold an event safely during a worldwide pandemic, Aravaipa Running (AR).

Having adapted swiftly and promptly to public demand and hosting a raft of virtual events since the pandemic struck and going back to hosting in person events since July; the team at AR have certainly had their work cut out for them. 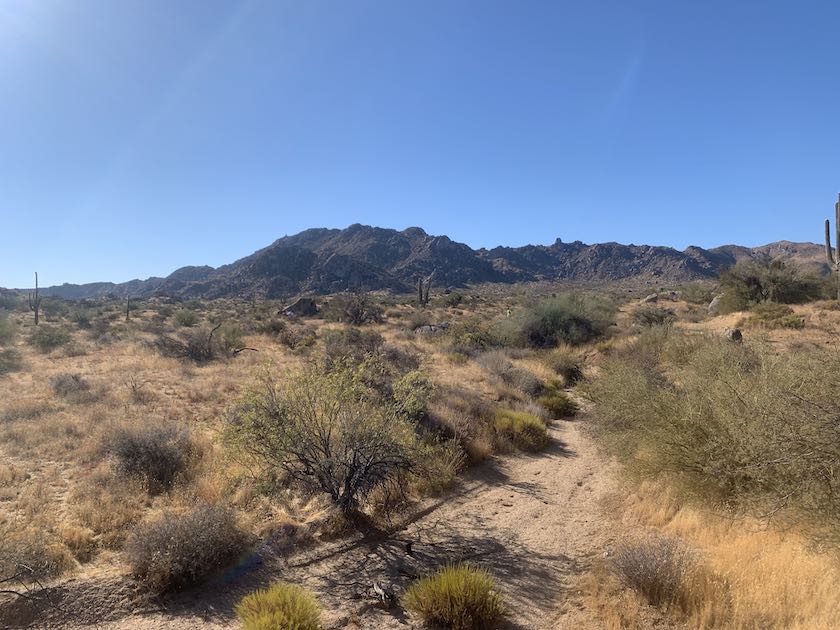 Having moved to Tucson, Arizona at the end of September I was well aware I was in AR territory with their base in Phoenix, just 2 hours up the road, I was keeping an eye on Ultrasignup to see if there was an opportunity for me to fit in an actual in-person race before the end of the year.

There was certainly a few on offer such as Javelina Jundred and the Lone Cactus but neither fitted in with me but then I found the McDowell Mountain Frenzy. December 5 with options of a 5 mile, 10 mile, 25k, 50k or 50mile I opted for the 50k, just enough to have to work hard without having to really push the boat out to do a very long day for a 50 mile distance.

Racing during a pandemic certainly comes with its heightened risk and the decision to race may be a little controversial in the present moment; runners need to decide whether we feel comfortable racing in-person and, if so, how we can best protect ourselves and those around us.

To help in making this decision it’s important to know how the race is going to be managed from the race organisation point of view and ensure you feel fully comfortable before committing. As anticipated there were a number of changes to the race experience which started with the pre-race information advising of what was to be expected and, feeling comfortable with what was laid out, I decided to proceed and race!

The pre-race instructions were very clear that there was to be no supporters or crew to accompany me during the race, so for me it meant a 5am depart (saving on hotel costs & added exposure) from home to reach the race start at McDowell Mountain Regional Park with enough time to register and be ready for my wave start at 8:20am. 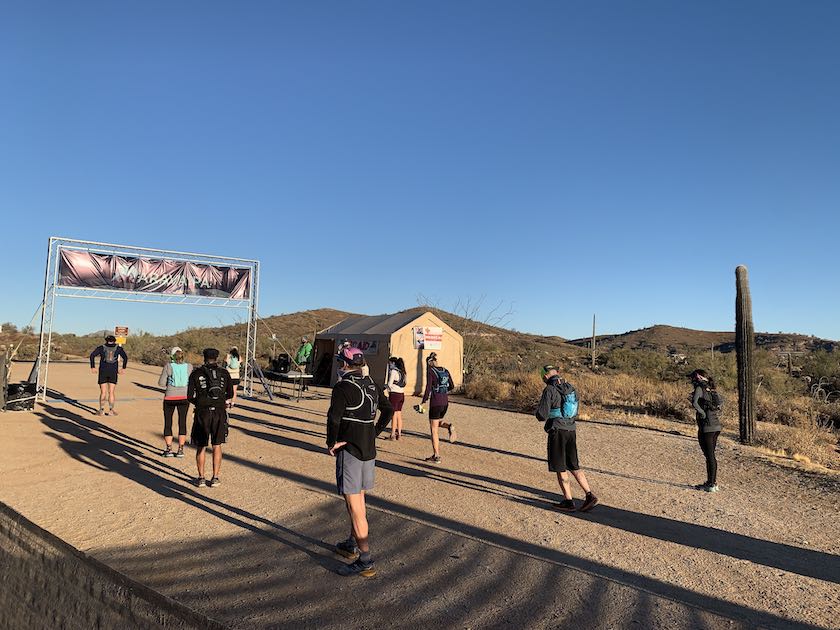 The race had the wave starts beginning every 5 mins from 6am for the 50 mile race and from 7:45am for the 50km race. By having the wave starts it meant the registration desk was also clear of people and the entire area was set up in a way to ensure that people could remain socially distanced. There were signs up everywhere with the now usual messages of keeping distance & keeping your mask on, you know the signs. It was all very courteous and civilized, I didn’t see one unmasked person and everyone was showing respect for each other’s space.

Entering the starting corral for the wave start all runners have their temperature checked by medical staff and then you take your place at the starting line as 1 of 10 runners, 6 feet apart – of course. It certainly made a change to the rammed start at UTMB that’s for sure.

Admittedly it does feel a bit strange at first as normally I would go to a race with friends or at least have Dion, my husband, there to cheer me on so there was no mass of runners high fiving each other with the music and adrenaline pumping. Instead, there was a feeling of solidarity amongst us all and smiling eyes connecting to each and every one of the 10 toeing the line. I started chatting to the runner nearest to me and soon we were all giving each other words of encouragement as the race director counted us down; not by a blaring microphone but actually joining in with us and our voices. It was different, but it was fun.

We were off! (Masks – or buffs – on!) Unlike the usual surge of runners heading off at breakneck speed, this felt more like a group run with everyone allowing each other space and time to find our ‘place’ in the pack and within 10 minutes we were all pretty spread out. With the space now clear I dropped my buff back down to run free as I had no one near me. The waves had been planned according to your ranking on Ultrasignup so it was pretty spot on and I only had a handful of runners pass me and me passing others throughout the entire day and each time there would be the call of ‘on your left’ and each runner would pull their buff back up during the passing manoeuvre. 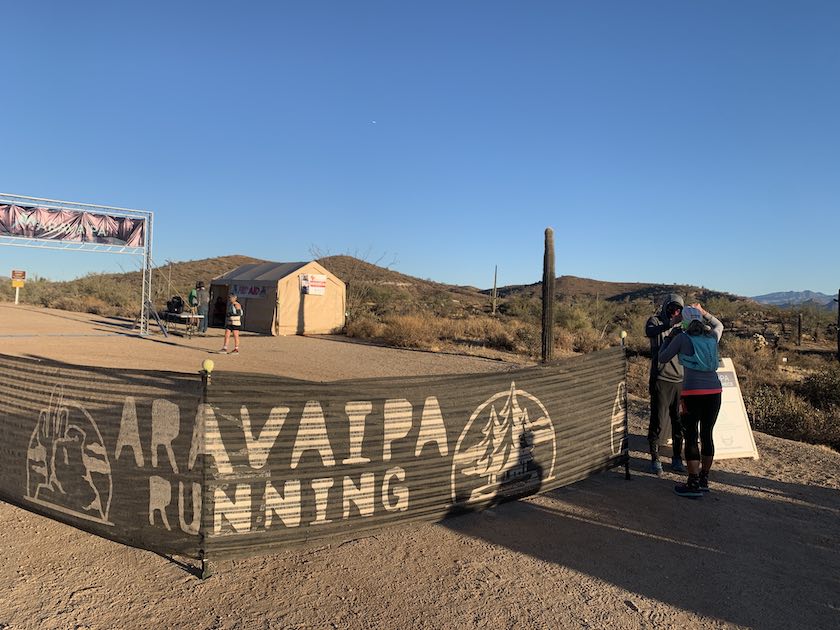 Checkpoint teams all wore face masks and runners covered up again as you were in the near empty checkpoints with hand sanitizer on arrival and departure of the checkpoints. Food was all individually wrapped, which was handed to you once you told them what you wanted, and you had to hold your bottles out to be filled by the team. Sure, this is a fraction slower process then just grabbing everything yourself but no-one seemed bothered by this.

The racecourse was amazing! If you’re ever in the Phoenix, Arizona area then it’s a must visit if you’re a runner or a mountain biker. Gorgeous single track trails that are undulating and very runnable in most sections, with stunning mountain views and plenty of cactus. In December the temperatures are perfect for running with a chilly start of 37F/2C to finishing in 69F/20C, and I just managed through on the hydration I carried, along with the checkpoint top ups.

The finish line however was a mystical line that did take a while to appear in the last 3 miles with the course becoming an unrelenting undulation but appear it did! Whilst there were no big crowds to welcome you in to the line there was certainly an abundance of enthusiasm from those that were there and a finish line feels pretty darn special regardless of the number of spectators.

Even though I missed the high fives during the race between runners and from the checkpoint teams, and I particularly missed the finish line hugs – 50k definitely deserves a hug in my book – I was elated and grateful to have had the opportunity to be a part of an amazing day out and I smiled all the way home to finally get the hug I needed. 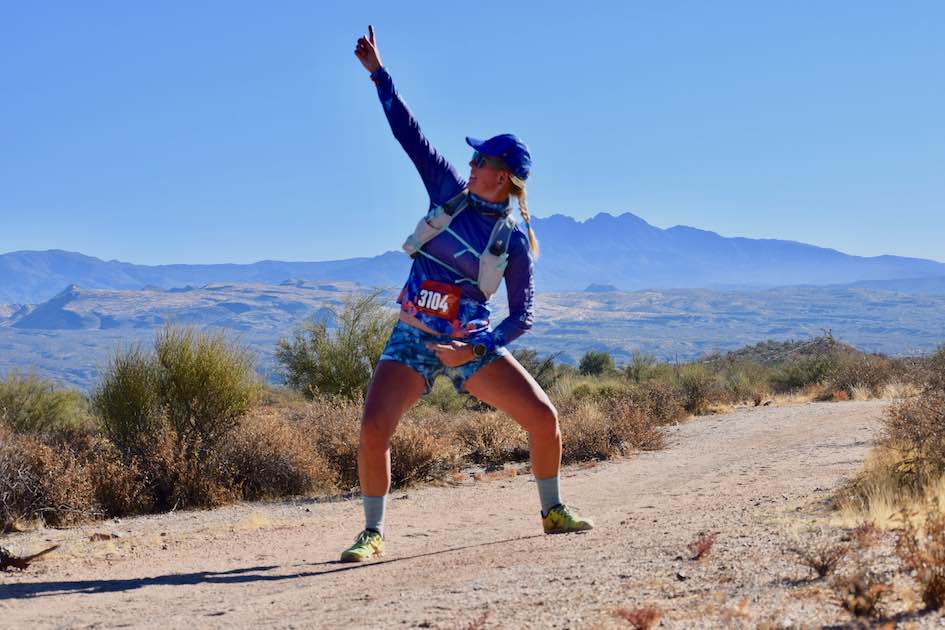 In true ultra-runner style runners turned up on the day and adapted to the new procedures without complaint, taking it in their stride and had a blast as usual. It just goes to show that we can still race and do what we love even during this time, as long as it’s done safely and we all agree to keep each other safe. I am sure things are different all around the world at the moment and it really comes down to what is right for you; whatever you choose to do, do it safely and stay healthy to run another day.

"In true ultra-runner style, runners turned up on the day and adapted to the new procedures without complaint, taking it in their stride and had a blast as usual" 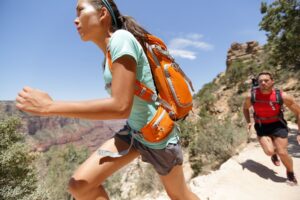 Last updated: 16-Aug-18 Written by Sports Dietician Rin Cobb Figuring out how much and what to eat for an ultra, let alone a multi-day race, 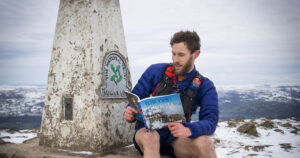 Congratulations to our winner Tim Woodier.

Last updated: 01-Feb-19 By Kathryn Bullock Many congratulations to RunUltra member Tim Woodier who won a signed copy of Kilian Jornet’s “Summits of My Life” 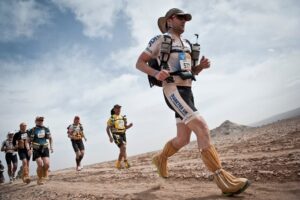 Roddy Riddle: Ex-international cyclist on his journey into Ultras

Last updated: 06-Nov-18 By Luke Jarmey Roddy Riddle used to cycle internationally until fate intervened. He was diagnosed with type 1 diabetes. But he refused