A celebration of women ultra runners

To celebrate International Women’s Day on the 8th March, we have gone to the archive for the best of our many pieces written by, and about, our outstanding women ultra runners. There is plenty of pain and suffering in these stories and lots of inspiration to be found. We have also pulled out some of the top tips for success – whether you are a man or a woman.

Fiona Rennie is a bit of a legend. She has made the West Highland Way race her own and became the first woman ever to cover a thousand miles on it. She has run and raced all her life and let’s nothing, but nothing stop her. She very modestly puts that down to the ultra running community but we think there is a good amount of true grit in there.

“I’ve entered the WHW race every year since 2003, but a brain hemorrhage in the April of 2005 prevented me from running that year. I was back again in 2006, and it was the last tick in the box of my recovery.

Then in February 2013, I was diagnosed with mouth cancer. I had to have major surgery to remove a tumour along with two thirds of my tongue. This was followed with six weeks of chemotherapy and radiotherapy. Having the goal of running my tenth WHW race a year later keep my head up throughout the treatment. Doing that in 2014 was so special! I wasn’t sure if I was recovered enough, but I did it with the support of the WHW family.”

Lucja Leonard is a 30-something, Dutch-born, Australian-raised, wannabe-Scot, living in Edinburgh. She is a hotelier by day, and an ultra runner and adventurer by night and any spare time.

She loves running in hot, desert climes but in 2016 went the other way and ran the Genghis Khan Ice Marathon. She came in first woman, conquering the freezing minus 34C temperatures of Outer Mongolia. Before the race she told us:

“It is really important to be prepared physically but also mentally for an extreme challenge. It might sound exciting and fabulous, but the reality of running in -40 degrees is not for the faint hearted, or so I am led to believe. With my experience of running in the opposite extremes of +40 degrees, I have learnt that you need to be as fit as you can be physically so that you are not causing yourself stress with that. Then, you can focus on listening intently to your body’s vital clues and managing your mind, so that you can not only complete the challenge in one piece, but enjoy it fully and not suffer as much.

I will be training intensively to be fully prepared to run the distance strongly and ‘enjoy’ getting out of my bed in the freezing temperatures over winter in the dark to ensure I am fully acclimatised. This will be the first winter I am hoping for as much snow as possible for my training. Normally I’d avoid the snow and opt for the treadmill on those occasions, but not this winter – bring it on!”

Hollie Woodhouse, the Adventurous Kiwi, has a lot of racing honours to her name but she shared her experience in one of her first ever adventure races when she had to be rescued 18 hours in.

“I had just returned to New Zealand, and a friend was looking for a third team-mate for the 12-hour Spring Challenge race. I was completely foreign to the multisport scene, but thought ‘why not’. Trail running, orienteering, white-water rafting and mountain biking sounded like a great adventure. I didn’t own a mountain bike but managed to borrow one that was far too big for me for the race. It was an eye-opener, and I very quickly learnt that you couldn’t take the outdoors for granted.

It was based in the Richmond Ranges near Motueka, and we ended up getting seriously lost on a ridge in the dark, trying to navigate ourselves down. We managed to find another team, who were also lost and followed them out. Not wanting to quit, we then hopped on our bikes and headed off, only to return to the same spot two hours later! Seriously lost, we had another crack, but it wasn’t long before the race organisers tracked us down and advised us it was probably a wise idea to call it quits. This was at 3am; we had started at 9am the previous morning. We found out later that one team spent the night in the bush and were found by a local pig hunter. While almost everything went wrong, I fell in love with adventure racing and continue to compete when I can.”

Nepalese trail runner, Mira Rai, has just been named as National Geographic’s Adventurer of the Year by popular vote. A world-class athlete, ex-Maoist rebel and karate expert, she has an extraordinary story.

She grew up in rural Nepal and was the eldest of five children. She left school at the age of 12, to help her family bring heavy bags of rice up and down the trails to market. At 14 she joined a group of Maoist rebels and was trained by them in running and karate for two years.

Two years ago she was encouraged by two male trail runners to enter the Kathmandu West
Valley Rim 50km race and she came first overall – she was the only woman in the race. She now races regularly and is also working to increase participation in running in Nepal.

Lowri Morgan is a Welsh TV presenter, former international rugby player and now an ultra runner. After a bad rugby accident, she was told she would never run properly again. She determined to overcome her injuries. She shared her experience of the Jungle Marathon with us, showing once again that it is all about determination.

“Despite running a few ultra distances during my training, my first official ultra was the Jungle Marathon in 2009. I spent up to 20hrs on my own in the jungle’s extreme conditions. My feet were a mess – they were sceptic, had deep blisters, trench foot and I had lost all of my toenails. I had been bitten 40 times by hornets and I was about to give up.

As the Producer, I was happy that we’d have enough footage to make a great programme – even if I didn’t finish. However, when I had accepted that I was giving up and my body gave up … a surge of energy came from deep in the soul and I believe this is where my mind took over. It’s amazing what the mind can do. All of a sudden when I thought I could no longer carry on – I found a 6th, 7th gear. I felt really strong and ran towards the finish line with a huge smile on my face. I was hooked!” 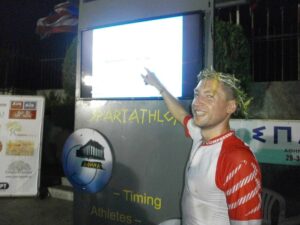 By Alice Morrison It is THE classic ultra – the oldest recorded one in history. The first edition (arguably) took place in 490 BC, ahead 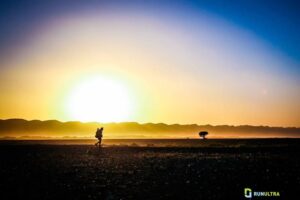 Last updated: 13-Apr-17 By Alice Morrison And they are off! It is the 32nd edition of the infamous Marathon des Sables (MDS) and the runners 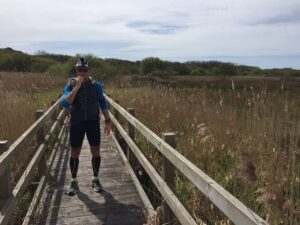 Last updated: 06-Nov-18 By Robert and Jackie Chapman Call him crazy but Robert Chapman has decided to run round the perimeter of Wales in memory