camino ultra – centre of the universe

In the midst of the covid-19 lockdowns, I was running more than ever as a way to stay sane and to commute to and from working at a hospital in London. I had run a few marathons before and was eyeing up several ultramarathons, but hadn’t been confident enough to enter one yet. I then came across the Camino Ultra team and their events, and was instantly sucked in. I thought that maybe this was the safe environment for me to have my first go at what most people would deem to be far too long a run!

I signed up to their 50km Lea Valley race which was due to take place in November 2020. Sadly covid-19 has stuck around for much longer than we anticipated, and the event wasn’t able to happen in person. I completed it virtually with a friend and knew I had to sign up for another in-person event with the team as they had made me already feel part of their family.

When I heard about the Centre Of The Universe race, I had recently bumped into an old schoolfriend, Rosie, (in the park, on a run of course!) who I hadn’t seen for more than 10 years. Things quickly escalated and we signed up to the Centre Of The Universe (COTU) race alongside another friend from Rosie’s running club, Stef. Neither Rosie nor Stef had run a marathon before, so actually did their first marathon as part of training for the COTU race.

We discussed plans for our route on runs and via hundreds of WhatsApps every day (when you find people you can chat about running to, you can’t stop chatting!). Camino Ultra were really helpful when planning our route, and all they asked was that we tried to start at least 30km away from the finish in Hackney and run at least 50km.

We settled on starting at Hampton Court Bridge and following the Thames Path to Tower Bridge, before then heading up the Regents Canal to Victoria Park and then Hackney. We hoped that by making the route as simple as possible, we could focus on pacing ourselves and not accidently adding an extra 5km by taking the wrong turning.

Our route was around 48km when I plotted it on my PC to send to our watches, so we intended to do a loop within Victoria Park before heading to the finish at Here East. Our tactic was to give ourselves a 2km buffer so that if we added any small bits of distance enroute, we wouldn’t find ourselves well over 50km by the end.

There was no mandatory kit for the race, but knowing there were no checkpoints, we all planned to take enough fuel and water to last us the race distance (despite having identified places enroute where we could top up), and an extra layer in case needed. Prior to race day we had all been sent a brilliant box of fuel from KOMFuel, which provided us with everything we needed for race day fuelling (and a wonderful Camino Ultra x KOMFuel buff), which I had topped up with some other favourites. Being sent a box of nutrition was a really thoughtful idea, and would be invaluable to those who are newer to the racing scene. We were all also given a tracker so that we could be timed and tracked.

After some panicked late might messages and emails to Camino Ultra the night before the race as we thought we had the start time wrong (sorry David!), we set off in the morning sunshine. We checked our phones before we set off and could see all of the trackers of all our fellow runners across the South East, which was quite something.

I was in charge of navigation on the day as I presumptuously though I knew the route reasonably well. I had done a recce of the Regents Canal path a few weeks prior, which was invaluable when we were all tired more than a marathon distance into the run. I would definitely recommend doing a recce of the final bit of all long races, if possible, as adding an extra bit of distance at this point would have really upset everyone – I certainly felt the pressure to keep us all on track and not mess up at this point!

The run was absolutely glorious. The sun shone all morning as we ran through Bushy Park, past Kew Gardens, past rowing boats near Putney and on towards Battersea Park. A friend met us with water in the park, which was at the 27km point. Without having checkpoints to aim for, knowing a friend was meeting us here was a great focus. My watch crashed at this point, but luckily I got it working again at the expense of it ending my run and me having to start a new run on my watch. Despite the heartbreak of the run now not looking so impressive on Strava (I’m over it, I promise), we set off heading east in good spirits.

We ticked off the landmarks on the South Bank before crossing Tower Bridge and heading up towards Victoria Park. It was around here where the reality of the distance hit. 50km really is a long way, particularly in the heat of the day. However, being a team of 3, all with our own strengths really helped us. Rosie kept us moving even when we didn’t want to, and Stef was endlessly strong and motivating.

We reached Victoria Park with a couple of kilometres spare, so did some small loops as none of us could bear to shuffle too far from the park gate that we knew we would head out of to the finish. We later found out that we were being tracked as we did our increasingly smaller loops of the park, tantalisingly close to the finish. Hopefully it provided everyone at the finish some amusement!

Crossing the finish line was amazing! The Camino Ultra team were cheering us in, as were groups of our friends. It was really special. Despite it being a low key start of the race, the finish line feeling was phenomenal thanks to everyone there. We couldn’t have been happier to be crossing a finish line again. We loved meeting other runners as they came in, finding out where they’d run form and how far they’d come. We enjoyed some food and drink in the sunshine, and soaked up the endorphins. You can’t beat that feeling after a good race, and I was thrilled to be there when my friends celebrated their first ultramarathon.

Next year I’m going to be running the race again, and I’m hoping to persuade a friend along for a good 4 or 5 hour natter as we run. I haven’t planned my route yet but I’ll definitely try to follow some of the same principles I followed this year – keeping it simple so as not to get lost or give myself more things to think about, and trying to persuade someone to meet me part way through to give me a focus point to aim for.

The Centre Of The Universe race is so wonderful and embodies so many of the things which are special about Camino Ultra and the ultrarunning community. It is so very welcoming and so inclusive – you can start at a place convenient to you, you can run a trail route or a road route, a flat route or a hilly route, you can run with friends, you can run as fast or slowly as you like, and you can run a far as you like.

I couldn’t be more grateful to Camino Ultra for organising such an amazing, innovative, race, and for the community which they have forged. From being apprehensive about signing up for my first ultra, I am now truly hooked on the sport thanks to them. And if they’ll have me, I’ll be at every race I possibly can be at, running or cheering everyone else as they experience the joy of one of these races.

"However, being a team of 3, all with our own strengths, really helped us. " 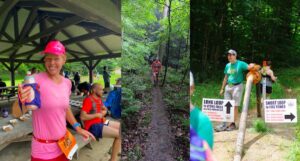 by Lucja Leonard The forest is quiet except for the soft rumbling of voices at the aid station, fire flies light up the dark and 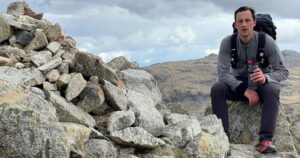 Last updated: 30-Jun-21 By Christopher Gaskin WHAT IS THE WAINWRIGHTS CHALLENGE? The 214 Wainwright challenge links all 214 Wainwright fells in the Lake District, England 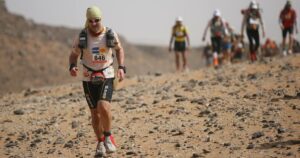 Developing Your Ultramarathon Training as You Get Older

Last updated: 15-Feb-21 by Andy Stewart I am 53 years of age and have competed in many of the XNRG multi-day ultras, Centurion’s TP100 and