With runners from Mexico, Ireland, Spain, Poland, Scotland, Wales and England toeing the start line under bluebird skies, the small but hardy pack of runners set off on the newly reversed course of the Lakes Sky Ultra.

The 7th edition of the Rab Lakes Sky Ultra, sponsored by Rab, supported by the Climber’s Shop, and partnered with Mountain Fuel, Voom Nutrition, Mountain Run and John Muir Trust, was well underway with the competitors taking on some seriously technical terrain. One Spanish runner quoted ‘the course reminds me of Ultra Pirinue and Zegama in the Basque country, made me think so much of my home area’.

As the heat of the day increased and the competitors off Striding and Swirral Edges, a lead started to be opened up by Brian Sharp running for Rab. Richard Keefe, local runner from Penrith was making a fantastic chase, attacking the 1st position as they dropped into Ambleside in the sweltering afternoon sunshine. Brian responded and put the pressure on up the long ascent of Red Screes. Richard Anderson and Charles Tidball were battling behind for 3rd and 4th position, whilst Brian made the push to extend his lead.

The drop into Haweswater was a killer in the heat, with many runners finding the ascent of Rough Crag and Longstile Edge exactly that, ROUGH, seriously hot and debilitating. On cresting the summit of Longstile Edge, Brian put the hammer down taking the win back in Patterdale in a time of 08:04:56, almost 20 minutes ahead of Richard Keefe who took the 2nd podium place. Richard Anderson battled away to take the 3rd podium position.

In the Ladies race Holly Wootten, last year’s winner, ran hard and strong dominating from the start and keeping a comfortable gap from Tess Elias and Helen Brown, who was 2nd place in the recent Rab Scafell Sky Race.

Holly, who has already had a great season in the Lakes, setting a new course record recently on the Adidas Keswick Mountain Festival 50km Ultra Trail race, kept the pressure on, challenging the male podium spots as well. Keeping the pressure on, Holly took the winning podium position in a time of 09:11:52.

Tess Elias kept chasing Holly and kept the rest of the males at bay, running around 30 mins behind Holly, she had a cracking race and cruised over the line into the 2nd podium slot in a time of 09:45:09.

Helen Brown, who is having a great time on the UK skyrunning circuit this year, ran a strong race and kept the pressure consistently on Tess for the 2nd place, came across the line in the coveted 3rd place in a time of 09:52:55 to complete the women’s trio.

All runners loved the weather although it was extremely hot for running and racing through the day. The fact that the course was reversed for 2022 allowed the sky racers to run hard over the Edges of Helvellyn without getting fouled up with the popular mountaineering tourist route.

Many of the runners commented that the route felt tougher due to the short sharp descents and long and debilitating ascents. Its always open for debate and of course the super hot conditions with no cloud cover will have no doubt influenced those statements.

All photos courtesy of Paul Mitchell

"Cracking the flags in the English Lake District"

Making history in the Veld

Last updated: 01-Sep-16 By Alice Morrison The brilliant Richtersveld Wildrun is making history this year by adding a frontier crossing to an already epic race. 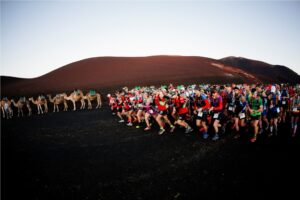 By Elsa Trujillo The next edition of the Haría Extreme on the island of Lanzarote (Canary Islands, Spain) is on 18 November. This year the 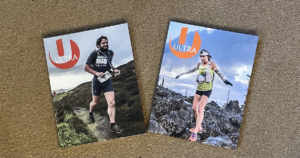 Interview with Andy Nuttall and Robin Bush of Ultra Magazine

Last updated: 03-Apr-21 By Kate Allen Ultra Magazine is one of those high quality, coffee table style of magazines that was started in 2015 by

The journey to the Arctic Marathon began when looking for a marathon that my wife and I could run to celebrate her 50th birthday. I found