The Montane Winter Spine Race Series. I’m not going to lie, these races never really appealed to me when I first started my running journey up until three years ago. Even until quite recently when I booked the Sprint I didn’t really see the appeal. I’m used to running in far flung places over many days with heavy weight. It should suit me as a heavier runner and having previously had a  military background also requiring to move fast with heavy weight over unforgiving terrain. So why didn’t it? I think I got my head around the Sprint being a full smash and grab race. I could run it hard and it’s over relatively quickly and these type of distances and elevation are something I’m capable of repeatedly over multi day events. The other races I think just appeared too long and I thought I’d get bored although I’d already booked the Summer Challenger, the 108 mile version. However the Challenger North and full Spine just seemed incomprehensible with the full Spine being around 268 miles. I’m someone who thrives off competition and feeling like I was in a race and the thought of trekking over days in my head doesn’t feel like a race. Anyway… I’ll come back to this later!

I travelled up to Edale the night before the race with the race starting at midday. This start time suits me as I only work nights. I struggle to adjust my body clock usually to morning starts but at this time and having a few days off prior to the race I felt it gave me a good chance to get some sleep and recovery in before the race. Prior to the race I felt a bit of apprehension. I knew my numbers showed I was as fit as I’ve ever been but I knew that before the recent Cheviot Goat where my legs just didn’t turn up and I felt horrendous with absolutely nothing in the tank. So which Jon was going to turn up?

I was excited prior to the start meeting up with my friends from Beyond the Ultimate who I’d raced with and who also help organise/run the Spine race series. It was also great to see a couple of my Scarpa teammates Dougie and Carmine who were racing in the Full Spine Race the day after.

Firstly there was kit check and registration. This was extremely thorough, making sure safety is paramount because the Pennine Way is very unforgiving and remote if you’re in trouble so being able to manage until help arrives is crucial. The kit list is ridiculously extensive but with good reason and the Sprint race requires the same kit as the full Spine race. Pack weights come in at around 7kg when you add your water and nutrition to the mandatory kit give or take. I didn’t actually weigh my pack, I don’t see the point. I make it as light as possible whilst making sure I’m happy with my kit selection. This was incredibly important, with windchill due to take temperatures as low as -18 on the high ground. The Pennine Way is generally quite high and very exposed so you can’t escape the elements. Add in the bogs and rocky ground and you have ‘Britains Most Brutal’ – the Spine race slogan!

After a race briefing we went to the start line and we were off. My plan was to push the pace from the off. I like doing this and I’m confident over this sort of distance I can maintain an effort for the duration. I started in full waterproofs as it was raining and blustery in Edale and I knew after the initial half an hour or so I’d be exposed to the harsh wind forecast and didn’t want to be unnecessarily faffing around with kit. Apart from the first hour or so when I was a little warm it worked well and I was comfortable for the duration of the race.

I had a couple of minor nav errors and a couple of minor moments of contemplation but all was going well. Everything seemed to click and I actually was feeling better the more the race went on. The plan was to make the most of the daylight which I calculated would be 4h 45 mins before it was dark. I pushed and was making good progress.

At around 40km the race nearly came to a crashing end though when I found myself in a heap on a particularly fast gradual decline landing on my right front chest and arm. I was lucky I didn’t hit my face as I had no chance to react it happened so quickly. I think I was just in the zone, I’d just passed some of the Spine Challenger runners and I was losing the light just prior to putting the head torch on. I got to my feet quickly but found it hard to get moving again. My right leg was a little sore and my chest was particularly painful which just proceeded to get worse through the race, not allowing me to take a full breath and every breath hurt along with clearing my through or coughing. It completely threw my momentum off and I got a brief spell of cramp going up the next sharp hill in my inner thighs on both sides. Thankfully this was just a short, one-off, affair.

I fell just before it became a little technical with a steep decent, crossing a river and then a graduated climb over some boggy ground. The weather also became worse with driving winds, hail and the temperature noticeably dropped. This actually probably helped me after the fall because it became slower going anyway.

The head torch went on and I continued to shout ahead to the Challenger runners excusing myself and apologising whilst they got out of the way for me. I was thinking to myself. These guys are crazy. 108 miles in this weather, let alone the 160 mile and 268 mile versions. Bonkers! It amazes me the people who turn up and have the mentality just to go out and get these races done. It takes a certain mindset and whether you are at the front or the back, I’m just in awe of everyone but even more so of the people at the back who are out there even longer. The body started playing ball again and because it was dark and I had encountered more technical terrain I didn’t have to breath or work as hard negotiating rocks and bogs. This was really how I managed to the end, just making steady progress.

Towards the end of the race for roughly the last 11 miles the wind intensified, mainly as a crosswind with the backpack catching the wind and knocking me off balance continuously. It was a bit of a slog. I was very glad to approach Hebden Bridge, knowing that I had made good time and reach the finish. The body, apart from the injury sustained, felt really good, my legs felt comparatively fresh. I thought this bodes well for the future! I managed to cross the line nearly two hours under the original course record taking the win. I was really happy with this as my running is going in the right direction and I’m learning from previous mistakes I have made.

So continuing on from my opening paragraph. The Spine race and not seeing the appeal… now I do. It was the most enjoyable race I have done. The weather, the terrain, the scenery, the Spine community, the runners, the organisers, the volunteers and the incredible Mountain Rescue. I get it. I thought the 108 mile race in the summer would be my limit, but now after watching the other races, dot watching with jealousy knowing they were out there still and I was done. I wanted to be there. So now I find myself impatiently waiting for the Winter Spine Race entry system to go live! Mind blown!

Thank you as always to Voom, Scarpa, Soar and Fractel for their support.

"The weather, the terrain, the scenery, the Spine community, the runners, the organisers, the volunteers and the incredible Mountain Rescue. I get it." 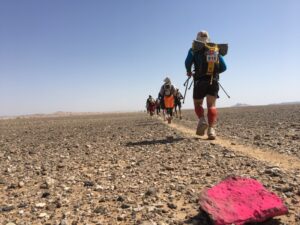 Last updated: 23-Apr-17 By Alice Morrison The 32nd edition of the Marathon des Sables (MDS) produced a score of heroic tales. Every person who takes 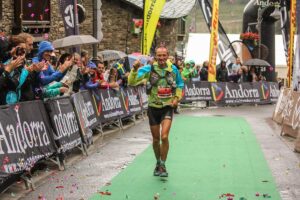 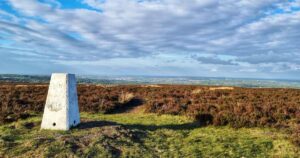 Challenge of the Trigs

Last updated: 20-Oct-20 By Oli Johnson   “A triangulation station, also known as a trigonometrical point, and sometimes informally as a trig, is a fixed