On a scorching hot weekend in the Lake District, the Rab Scafell Sky Race was some race!

The course entails 40km of technical singletrack and scree and makes this a classic skyrunning route to be reckoned with. The circular route allows you to run from the centre of the Great Langdale Valley, with the events centre based in front of the New dungeon Ghyll Hotel, over Lakeland Fells and through Lakeland Valleys, whilst you summit England’s highest mountain on route and traverse some of the most challenging trails in the central Lake District. With sections of scree and light scrambling thrown in, it is a serious test of nerve, skill and endurance.

There was a great mix of skyrunners of all abilities, with many taking the Rab SSR on as their first ever skyrace to the elite end of the field seeing a return of Tom Evans, 2nd place in 2018 and Georgia Tindley, with elite runners such as Jayson Cavill, Brian Sharp, Oliver Mitchell (3rd place in Snowdon Sky Race 2022), Mark Darbyshire (Lakeland 100 winner in 2021), Spencer Shaw (SSR previous winner and CR holder in 2021).

In the mix for the women there was Helen Brown (South Wales Womens Record Holder), Alicia Schwazenbach (placed 3rd in the Snowdon Sky Race). Outside of the elite runners, Roberta Guibillini had a fantastic race, taking 1.5 hours off her own time from last years race.

As usual the race had a great mix of nationalities in the entries and out of those that came to run on the day they had skyrunners of Italian, United States, Canadian, Irish and Dutch nationality.

Tom Evans, who is well under way with his preparations for tackling the Ultra-Trail du Mont Blanc (UTMB), produced a strong performance taking the victory with an incredible time of 4:31:12, beating the course record by 33 minutes!

“Being able to race in the UK is always very special. Scafell Sky Race is one one the most epic races I have ever done. To win and set a new course record makes it even more special. From the supporters to the organisation, it’s the most amazing race!”

Elsewhere Georgia Tindley went on to win the women’s race this year and also set a new course record in the process with a great time of 5:48:56.

“The route was really cool, interesting and varied. I loved skirting Great Gable and running down the slab. Definitely a course you want grippy shoes for!

It was a really challenging mix of conditions: the rain of the last few days meant it was boggy and wet underfoot, with water run off making the rocks super sloppy in the first half. Then in contrast, the heat of the day was a struggle!

I was happy with my performance and pleased to knock some time off the record. It felt like a hard day out with it being my longest run since Glen Coe, but the beautiful route made it easier.”

Runners were greeted by a warm welcome at the finish line in the Langdale Valley, many staying locally to make a weekend of it.

Next year there will be a few additions to the Scafell Sky Race weekender with the following:

Entries for next year’s event will be opened soon and the organisers Mountain Run have two other skyrunning races; the Lakes Sky Ultra and Pinnacle Ridge Extreme, which are both next month and it’s still not too late to enter those.

"Scafell Sky Race is one one the most epic races I have ever done. To win and set a new course record makes it even more special - Tom Evans"

Last updated: 25-Oct-18 By Luke Jarmey We’re pleased to announce our top reviews for August. Congratulations to John Ryan (@ultraventure) who will receive a pack 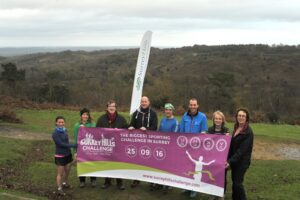 Last updated: 02-Jun-17 By Elsa Trujillo A new sporting challenge for the UK has just been launched. The Surrey Hills Challenge is a series of 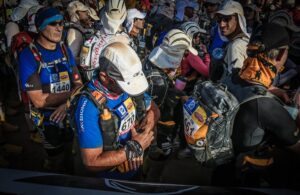 Last updated: 11-Aug-17 By Steve Diederich Ensuring that you have all your supplies and essential / mandatory equipment selected and stowed correctly so that the