The Namibia Crossing Wildrun® is a five day crossing from South Africa to Namibia through the heart of the /Ai/Ais-Richtersveld Transfrontier Park. Its mountainous landscape and amazing geology are bisected by South Africa’s longest river.

Here’s how one runner describes it: “Personally, one of the most sublime running experiences I’ve had in 28 years of ultras. Totally unique, surreal landscape and superbly organised. A ‘must do’.” See more reviews here.

The race is completely supported, with runners only having to carry their water and snacks. Register your interest now as the event can only host a maximum of 80 runners.

However, there are some ultras that we run – or want to – because they are just plain magnificent.
The Namibia Crossing Wildrun, previously known as the Richtersveld Transfrontier Wildrun, is one of those.

The Crossing is a 200km, five-day foot race from South Africa to Namibia through the ancient arid landscape of the /Ai/Ais-Richtersveld Transfrontier Park. 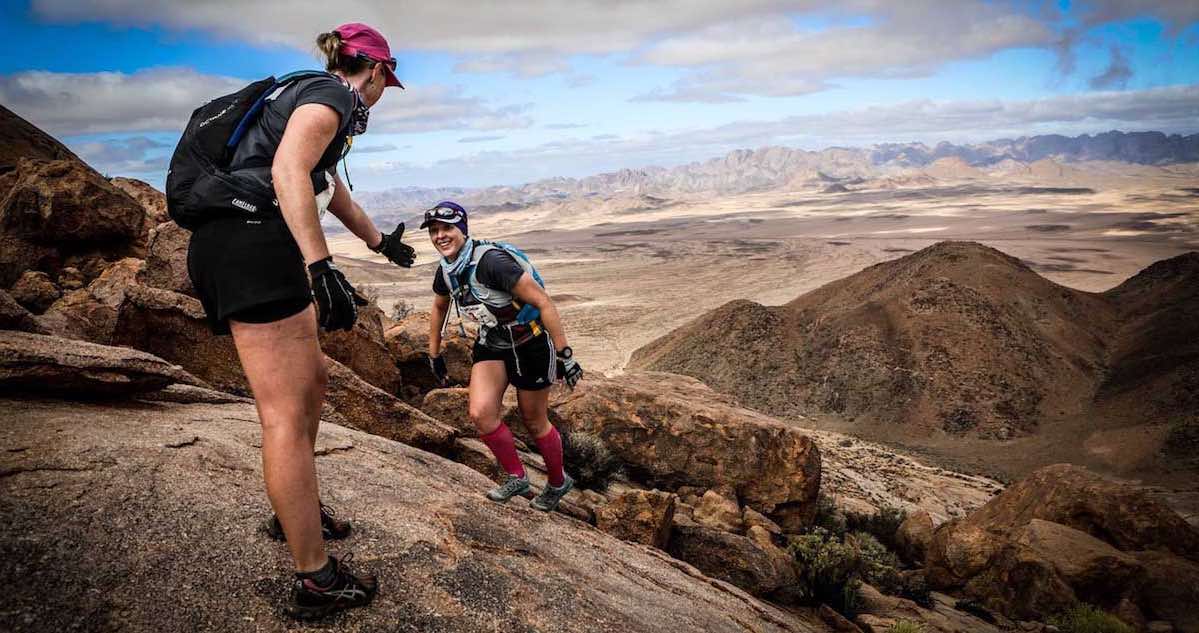 You run through the crystal fields of Sendelingsdrif in South Africa to the infamous giant boulders of Tatasberg deep in the /Ai/Ais-Richtersveld Transfrontier Park; you then cross the Orange River into Namibia and the wild lands of the Fish River Canyon.

I haven’t run this race but I HAVE biked through Fish River Canyon and it was truly fantastic. Plenty of leg-burning ascents and glorious descents but it was the sheer scope of the landscape that I loved.

The wide skies of Africa are something that are really worth seeing for yourself. I warn you, though, once you’ve experienced them, they will call you back.

The soaring landscape affects all the runners who take it on. Linda Doke from South Africa has this to say about the race:

“What an incredible privilege it was to spend 5 days running through this magnificent part of the world on the Richtersveld Transfrontier Wildrun®. Sometimes it takes experiencing places like this to remind us how just how fragile and yet so powerful nature is, and how unbelievably insignificant we are in the bigger scheme of things.”

Richtersveld is an arid, desert landscape punctuated by rocky upthrusts and high mountains but contrasted with the gorgeous lushness of the Orange River which forms the border between South Africa and Namibia. 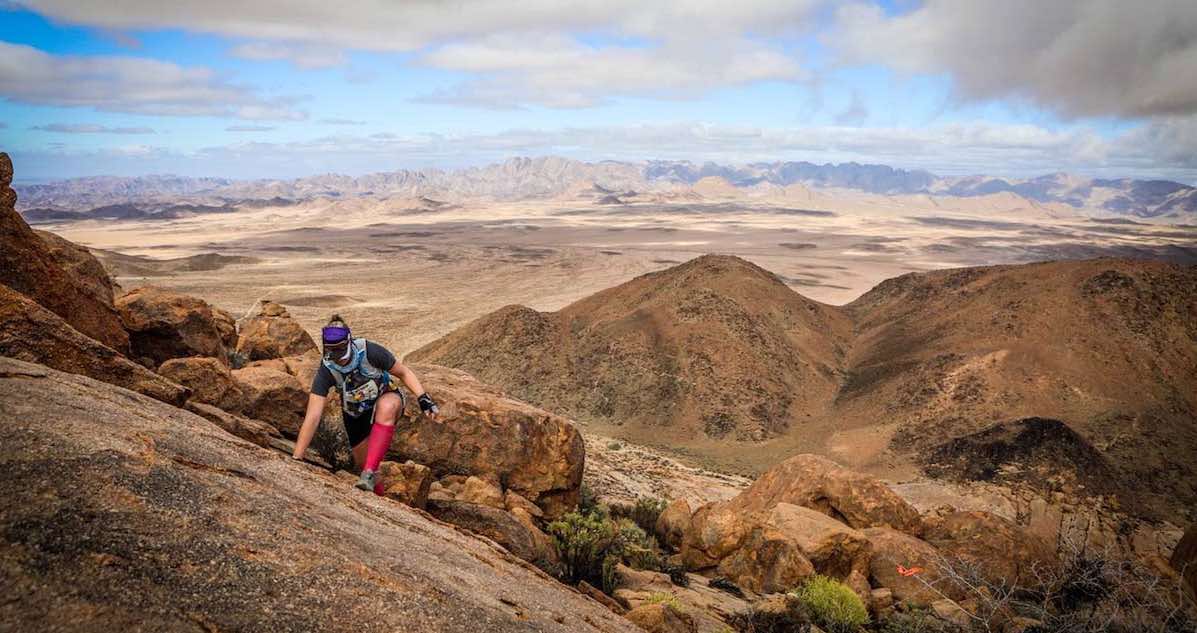 The highest point in the province is 1,377m and the lowest is sea level. Interestingly, the Richtersveld is regarded as the only arid biodiversity hotspot on earth and the majority of the area is inscribed on UNESCO’s World Heritage List due to its cultural values.

The people of this area are called the Nama people and they live and graze their flocks within what is a huge national park. They follow a transhumant lifestyle – where they migrate seasonally with their livestock and live off the land.

It is a great place to run and a very egalitarian race. In 2016 it had an outright female winner in Joanna Williams.

That year, Tobias Mews from the UK  came second and told RunUltra:

“People talk about the loneliness of the long distance runner, but the Richtersveld is to be shared. Mutual gasps of wonder should be appreciated with others, it’s lovely to make friends as we run and in Jo I have found a bond – it’s great to run with someone else and share the journey.”

Ian Corless, has covered a fair few races in his time, but for him the race is pretty special:

“I would go as far to say that the Richtersveld Wildrun is one of the most beautiful races I have seen. And if you are travelling to South Africa, there is also the lure of Cape Town, a visit to a game reserve, the wine routes and a visit to Hout Bay to tempt you. On the other side there is Namibia, the Orange River and the Augrabies National Park.

“Weathered by water, rain and volcanic activity, the park is a geological masterpiece of natural sculptures. It’s like running through a Henry Moore or William Blake vision of what a mountain desert wilderness should look like.

Mountain summits, deep canyons and the massive granite boulders of the Tatasberg make the Richtersveld Wildrun one of the best running playgrounds in the world.”

That is some endorsement.

The newly named race, which is fully supported, has introduced a slightly different route for 2019.

The new route will keep the best of the first three days of the original edition, including the Vyf Susters, Hellskloof Pass, Armmanshoek, the Tswayisberge, Springbokvlakte and the famous Tatasberg boulders, but on day 4, it will veer off and cross the Orange River at De Hoop into Namibia and the unexplored southern part of the Fish River Canyon.

This 50km stage of the Namibia Crossing Wildrun takes runners into a wilderness that you can’t get to by vehicle and gives you a chance to see some wildlife including Hartmann’s mountain zebra, kudu, gemsbok, springbok, Namibian wild horses and giraffe.

Also, at the end of the day, you finish in the canyon at a natural hot spring, before taking on the final day of roughly 25km to finish at the /Ai-/Ais Hot Springs Resort.

Hot springs at the end of the day? Where do I sign up!