What is the Marathon Des Sables? It is a multi-day ultra-marathon over part of the Moroccan Sahara where participants cover 250 kilometres (150 miles) with all of their food, clothing, bedding and medical equipment, together with compulsory safety equipment (the emergency flare weighs 350 grams on its own) on their backs. The MDS website describes this as running from London to Dover, deciding not to go to France after all, running back to London, in 120 degree heat, with a back pack on (approx. 10kg) and voices in your head talking about cold beer. This turned out to be about right, especially the last part.

The actual routes and formats change every year, but there is always a long day – ours was 81.5Km, more about that later. We stayed in a bivouac village with each bivouac sleeping 8 competitors. We were in Tent 145 and this became a great place to be at the end of a searingly hot day running.

We travelled to Morocco on 4 April 2014 and each competitor was warmly greeted individually by the race organizer, Patrick Bauer. This was to be the first of a number of warm encounters with Patrick who was subsequently seen at the start of every stage, singing happy birthday, celebrating the victories of the previous day, applauding those who had fallen by the wayside but had the courage to come and test themselves against the desert, and at various checkpoints throughout the race. He was naturally also at the finish line on the last competitive day to congratulate every finisher individually, present them with their medal and thank them for their participation. A lasting memory will be Patrick dancing on top of a truck to ‘Happy’ by Pharrell Williams as he encouraged all around him to join in. Tent 145 preferred ‘Highway to Hell’’ by AC/DC which signalled the ten second countdown to the start of each stage.

Fantastic. Today was the culmination of 12 months fitness training and preparation. We set off across a 3 km stretch of firm ground covered in stones and aiming straight towards the dunes of Chebbi Erg, the largest in Morocco. The contrast of the charcoal grey with the orange of the sand was stunning. At first the heat was ok, although it was noticeable that sweat simply evaporated as soon as it appeared. Our shirts remained dry throughout and we never had to wipe sweat from our faces…a telling sign of the temperatures to come. Helicopters were buzzing overhead with photographers hanging out to capture the amazing sight of approximately 1030 runners all heading straight into the vast sea of soft sand. The downdraft was a momentary relief from the heat.

We entered the dunes and were faced with what can only be described as a seriously hostile environment. As striking as the scenery was, it soon became a psychological challenge as the rolling, leg sapping sands were both relentless and never ending. At times it felt as if I was pushing forward but actually going nowhere and every now and then relatively quick progress was achievable as long as I was able to find sand that had not been trodden on already. The temperature went up several notches in there as the sand simply reflected the heat straight back up. At one point I stopped to take some photos and soon got over it as I felt like my legs were starting to cook! It was at least 45C and at times I am sure it was closer to 50C.

Eventually check point 1 was achieved and it transpired that we had inadvertently taken a route that was 2 km longer than the correct route, so 15km rather than 12km of trudging through the dune section. Needless to say we all started to pay much closer attention to the instructions and our compass readings after that.

From check point 2 to the finish line of the first day was easier in terms of making headway but by then the weight of the backpack was eating into my shoulders and I was still getting used to managing my body temperature. I adopted a run for 60 walk for 60 approach, where each strike of the left foot counts. This worked well and it was noticeable how quickly I was able to overtake and leave other competitors behind without overheating. I revisited this strategy often during the week.

Before the finish I came across two separate situations where competitors were receiving medical assistance. Both were flat on their backs and had been put on drips by the medics. A little further on I found myself temporarily next to a Frenchman who kept stopping at the top of each dune with his heart rate monitor constantly setting off an alarm. Disturbing. Once back in the tent I heard that a number of emergency flares had been seen during the stage. Over 20 people had fallen by the wayside on day one. Apparently this was one of the hardest starts in the 29-year history of the race, but I would take this start anytime. To have those dunes on day three would have seen a much more significant drop out rate. 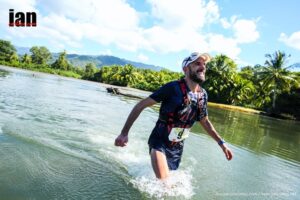 Last updated: 20-Aug-18 By Ian Corless Day four of the Coastal Challenge moved inland leaving the coastline behind for 35 kms of relentless climbing, at 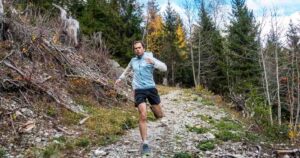 Last updated: 05-Dec-18 By Tim Oliver At just 115g c is a contender for the lightest waterproof breathable jacket on the market. We put it 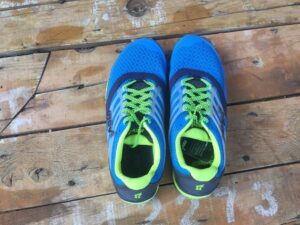 Last updated: 20-Aug-18 By Alice Morrison The blurb for these Inov-8s says “for long miles on hard packed trails”. I tried them out on trail/mountain