Energy Depletion: At The Heart Of Every DNF?

All roads from a state of energy depletion can ultimately lead to a DNF, and even if this is not the primary cause, I put it to you that it is likely to be up there as a major contributing factor.

I Know This Because

I’m still on single figure DNFs which I figure ain’t bad in 35 years of racing. My two biggest were at UTMB 2011 and the 268 mile Spine Race in 2014. Both took place in big landscapes and both in bad weather.

A contributing factor was that I did not eat enough to stay warm and make good progress. It was this that was also my undoing at The Spine Race and here’s an extract from my race report, which picks up my progress at around the 55 mile point during the first night:

‘There is, however, one thing in my world that is starting to puzzle me: Every time I drink I want to pee a few minutes later. Every time. I can’t believe I’m over-hydrated – I’m not exactly Sweat City here and I didn’t drink all my 1.5 litres during the first 45 miles – but what else can it be?

It’s only when I’m at the second checkpoint at 105 miles and quizzing the race doctor that understanding comes. When the body is cold the brain will trigger urination to get rid of as much fluid as possible so the blood can concentrate on warming the vital organs.

My frequent peeing for no apparent (thirst) reason is a BIG sign that I’m cold – and probably have been since well into the first day. Except I don’t feel that cold – OK, I’m not toasty – but I’m not shivering either. It’s another reason I don’t register there might be a problem. Meanwhile dehydration is working it’s own stealth attack…

The fixes are one or all of these three: Eat more, wear more, or work harder. Anyway, realisation is for later – for now I don’t have the knowledge to make the connection so I simply continue to drink, (cold water – and I’ll find out later this is another factor in my decline) pee and add/remove layers as I feel – all the while continuing to dig myself into a hole that two days later I will be unable to climb out of.’

I will eventually grind to a halt at 160 miles after three and a half days of English winter travel.

I had been suffering from the effects of creeping hypothermia since the first day that has twice put me into a big hole. On reflection the lessons were these:

Breaking out of that spiral is tough and part of the reason for that is the associated degradation of our cognitive abilities – in other words it gets harder to think straight and even register the decline as our focus narrows into survival mode.

Those people with high levels of mental toughness can hang on in there for quite astonishing amounts of time, but ultimately the body will shut down unless this pattern is broken.

Arresting the decline takes decisive action and high levels of motivation at a time when we’d really just like to sit down and have a hug and a nice cup of hot sweet tea.

However, if we have clocked the warning signs, then decisive action should include some or all of the following: Eat, drink, add clothes, and up the workrate.

Give it time, but the good news is that it is entirely possible to recover and finish after such a collapse. Believe me, I know.

Posture deteriorates, stride shortens, cadence and rhythm take a holiday and suddenly we have the weight of the world on our shoulders drilling our feet into the ground.

The increase in impact forces alone, mean that foot damage is more likely, and the quad muscles in the thighs – biggest muscle in the body – take a disproportionate battering which further degrades our ability to move fluidly.

Somewhere down this line as the deterioration accelerates, is a trip and a potentially catastrophic fall: Game over.

We’ve all seen it; it’s not confined to the end of races, and it’s not only in events beyond marathon distance: Eyes glassy, feet barely leaving the ground, and posture almost doubled up.

No wonder it’s hard, because one of the consequences of the doubled up posture is it’s just damn difficult getting air into the lungs and allowing the heart to pump the oxygenated blood around the body, if that body is adopting the position of constriction.

Try breathing when you’ve got your head between your knees if you’re still not convinced. Our systems are designed to operate best in alignment, but while inefficient posture may be what we see or experience, it may still only be a symptom of the ultimate enemy: Running out of juice.

Decision-making Takes A Dive
The deterioration in cognitive ability has already been mentioned, and one specific aspect of this that potentially speeds us towards a DNF is the switch from proactivity to reactivity: We are no longer thinking ahead and planning a response – we are, at best, simply reacting to events within a bubble of interest that is steadily shrinking.

If mental toughness is still the glue that is holding a rapidly deteriorating body together, then unless a stimulus is linked to the action of putting one foot intfront of the other without falling over, it’s likely that we just plain don’t care.

At worst, these go completely out of the window; at best it’s reduced down to tactics in the now, and those revolve exclusivly around Just. Getting. To. The. End/Checkpoint. It’s yet another symptom of a shrinking attention span where, if it ain’t essential, it ain’t worth it.

The simplest of navigational tasks can become a challenge of monsterous proportions when the tank is running dry. Add darkness, isolation and bad weather to it and you are potentially into a life-threatening situation somewhere down the line.

The upshot of this is that you are more likely to make mistakes, and that will mean you will be delayed or even lost, and this will be accompanied by an even more accute sense of humour failure.

This in turn focuses your attention on the fact that you really now are in the s*** as a result of your complete and utter failure to get the basics right.

At this point your self-esteem curls up in a corner and throws in the towel.

Now you are firmly into a compound and cummulative downward spiral as more time out on the trail means more time for your physical condition and mindset to deteriorate,  which in turn feeds your negative emotions, and those negative emotions then work through to poison your thoughts and your actions.

You become locked into an emotional-mental-behavioural downward spiral, and the longer you’re in it, the harder it is to break out.

Your inability to see the big picture means you are likely be spending time repeating the same behaviour that got you into this mess in the first place in the vain hope that this will break the pattern. And if you always do what you’ve always done…

Once again, it is possible to stage a rescue but only if you fix the cause once you’ve done managing the symptoms and that – because Performance Is Emotional – means changing how you feel first.

The hard part is recognising, through the self-generated fog, that you need to do something different to get to that point and then being motivated enough to see that through.

This can be summed up in two words: Mood Management.

Moderation is one of the first casualties. You’ll be all over the place and switching from deep despair to blissful happiness at the slightest stimulus.

Small things become big things as your sense of proportionality takes a hit and that means you start paying attention to things you shouldn’t.

This then feeds your decision-making, which becomes irrational and premature, stimulating behaviour that is less than helpful at best and guaranteed to further feed the downward spiral at worst.

Now that I’ve painted a truly black picture for you, the good news through all of this is that there are few things that eating and drinking wont fix – especially for the blokes.

If the wheels are coming off, then you can do far worse than having a default position as follows: Veered off track? Time for a snack…

About the writer: Andy does the training stuff for us. He is author of three books including ‘So You Want To Run An Ultra’ He runs long for the challenge and fun of it and has been a professional coach since 2000 working across business-education-sport-lifestyle. He lives with his family in North Yorkshire, UK.

Disclosure:
We use affiliate links in some of our reviews and articles. This means that if you purchase an item through one of these links we will earn a commission. You will not pay more when buying a product through our links but the income will help us to keep bringing you our free training guides, reviews and other content to enjoy. Thank you in advance for your support.

"The hard part is recognising, through the self-generated fog, that you need to do something different to get to that point and then being motivated enough to see that through" 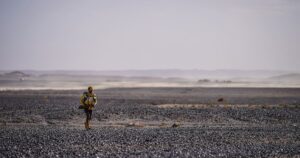 MdS SOS, how to chew the elephant 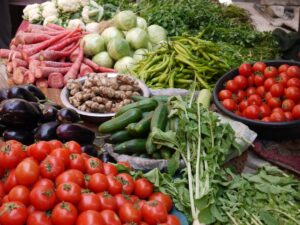 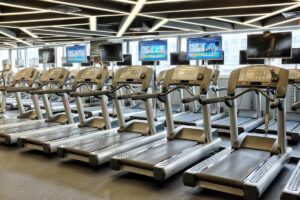 Treadmill or Dreadmill – 3 sessions to keep you fresh