One of the greatest ultra runners of all time, Ann Trason, once said that “ultra running is just an eating and drinking competition, with a little bit of running thrown in”. If you want to improve your ultra running then listen to Ann, she knows.

There might seem too many limiting factors to ultra running, plenty of things that can trip you up and knock you for six before that finish line. But if I had to choose one thing that bundles of ultra runners are guilty of, it’s under-eating during race day. That and starting too fast.

So what should you be eating?

Working alongside sports dietician Renee McGregor, we normally work off roughly 1-1.2g of carbohydrates per kilogram bodyweight per hour. So for a 60kg runner that’s 60-72g per hour. Or three SiS gels, about 80g of Haribo, three bananas or 400ml of energy drink Maurten.

Everything I’m talking about is carbohydrates as this is the optimum fuel for endurance sport. Running at the right effort level you will be utilising a ratio of fat and carbohydrates from your body’s stores but the carbs are the ones that will run out and they are also the ones that allow you to work at a higher intensity.

This isn’t a fat-adapted, keto, “broscience” blog about running ultras barefoot. This is about what’s suitable for 99% of the population to run to their best over a long distance. Yes, there is always that one guy on Facebook who ran a half decent time at “The Super Tough 100” off just olive oil and nuts, but there’s also everyone else who doesn’t feel the need to shout out loud about what they’ve eaten every time they race. 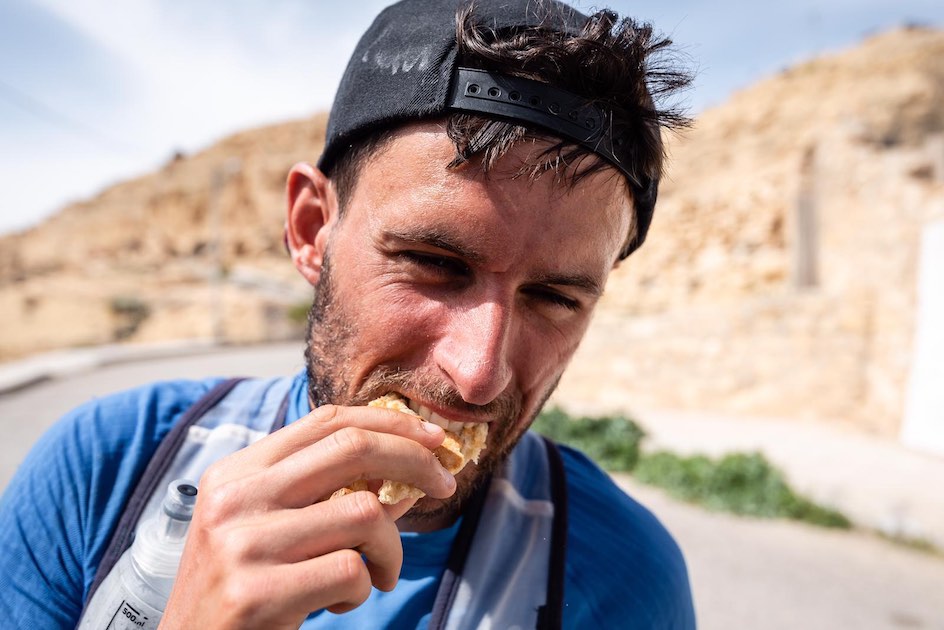 If you’d like a nice paper discussing this topic then check out “Nutritional implications for ultra-endurance walking and running events” (Williamson, 2016) and you can also look at fat-oxidisation rates in work by the likes of Achten, Venables and Jeukendrup (2003) to see what kind of intensity elicits the best ratio for ultra running. The best way to get an idea is to pop to a sports lab and have some FatMax testing done.

One thing that is worth noting is that female athletes do work differently and have shown different rates of fat oxidation (Williams, 2004) and a lot of the research is very male dominated. This doesn’t mean there isn’t value in it, but one must consider gender variances and how the research might not reflect these.

But in summary, although there is some limited research on fat adaptation (Louise Burke has done some great stuff for and against), carbs are what will keep you going at the optimum intensity for the vast majority.

So if you’ve carb-loaded effectively (taking on an increased amount of carbohydrates in the build up to your event to load up muscle glycogen stores) then you’re starting your race with a full tank.

For marathon intensity this is normally good for about 90 minutes of running, longer when you’re going easier. It’s the same as a car really. Rag it at 100mph and you’ll soon see your fuel disappear. Many won’t eat at the start of a race because they have this built in store, but this is wrong.

Carrying on with the car analogy, you don’t just wait until the engine is empty to pour in more fuel, you top up beforehand, often at the convenience of passing a petrol station. Well think of aid stations or checkpoints as petrol stations, you need to fill up.

That said we can’t just take a full tank in whenever we like. There is only a certain amount our bodies can take each sitting, hence the above 1-1.2g per kg bodyweight per hour. It does vary person to person and related to the exercise intensity you’re operating at. Yiannis Kouros, another all-time great ultra runner, was the perfect storm and his records have stood the test of time. What is his biggest strength though?

Kouros, who holds records from 200km all the way to about a million miles, had many strengths but the one that stands out for me was his eating. Look at the 1989 paper by Rontoyannis et al. (1989) that covered his energy intake and expenditure for the Sydney to Melbourne race over 5 days.

On day one alone the Greek took on 135grams of carbs per hour! He averaged 90g per hour for the entire five days. His marathon speed, mental toughness and running gait may have all been complimentary to great ultra running, but his eating was world class.

What was he eating? Mainly Greek sweets that are just little balls of sugar. Having grandparents who live in Cyprus I’ve eaten my fair share and they can get quite sickly. Kouros must have eaten thousands of the things!

Before you head to your local Greek supermarket to stock up (grab some halloumi whilst you’re there, it’s great), it doesn’t have to be all one type of food and it doesn’t all have to be sweet either. It does help if you’re taking on a lot of carbs though.

Kouros did take on tiny amounts of protein each day and the theory behind this is to stop the body breaking down muscles to gain protein for energy, but this will likely happen due to the lack of carbs available so my limited understanding suggests more carbs is always the answer. Little and often to keep the body happy.

From a personal point of view what do I eat in a race? Unsurprisingly it’s a lot of carbs. I have a real sweet tooth and this is let loose when it comes to race day. I aim for 90 grams or more of carbs per hour and this depends on the format of the race too. My favoured 24hr format means you have a crew every 400m to two kilometres so larger items, like homemade rice cakes or flapjacks, can be utilised.

More recently the high energy liquid fuels like Tailwind, Maurten and SiS Beta fuel have become popular. I’ll normally have a mix of these with some Precision Hydration electrolyte mix which also has carbs in as well. Taking in some carbs with your hydration is a good way to tick off a number each hour and then you can supplement with other sources.

That’s where it gets fun. You have to find what works for you and every long run should be a test. You name it, I’ve tested it as a run food. Sometimes it works wonders, other times you might end up in the bushes, but it’s all part of the ultra running journey. Note that 500g of dried apricots might be easily packed and fit the nutritional points, but don’t ignore the amount of fibre.

Books like Feedzone Portables provide lots of sweet and savoury options, but the important thing is to think about before, during and after each race. Take notes and improve each time. If you want to get to the finish line of your next ultra quicker, it’s not all about running faster.

RunUltra Note:  Anyone with any food allergies or medical condition should seek specialist medical or dietary advice.

Robbie is a self-confessed insouciant ragamuffin from London, UK, but now lives in Chamonix France. A 24hr Specialist who is doing all he can to be competitive in the mountains.  He’s recently took on the Jordan Trail covering 650km over 9 days, 10 hours and 17 minutes.  Check out his website here.

"This isn’t a fat adapted, keto, broscience blog about running ultras barefoot. This is about what’s suitable for 99% of the population to run to their best over a long distance." 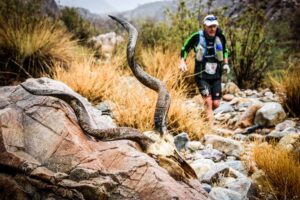 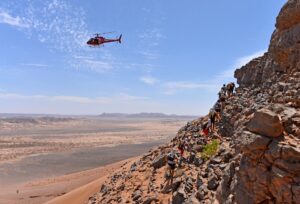 10 Things You Need To Know about ultramarathon running