Mountain running can be an integral part of an ultra runners training regime whether you’re going to be racing up hills or not. Some will use the advantages of running at altitude during their training where possible or may even be training for a race up in the clouds so how do you fuel yourself when taking on those hills?

By their very nature mountains tend to be somewhat off the beaten track so you’ll likely need to consider being self-sufficient for the duration. The environment you find yourself in, particularly if running abroad, can also be somewhat different to your usual run from home. As you would with your kit, you should plan your sustenance accordingly.

As I’ve harped on about in previous articles, your body uses a mixture of fuel sources when running and along with a few other personal factors, it’s the intensity and duration that mainly determines this. With this in mind hills generally mean running at a higher intensity and so carbs will be used up more readily. If you’re more accustomed to steady state runs, naturally allowing your body to adapt to fat as your main fuel source, this may come as a bit of a shock to the system. Some will already be able to identify with this, having felt the effects of lower blood sugars if they’ve not compensated and taken in more carbs during these intense runs. Symptoms can include feeling dizzy or shaky, less able to concentrate, excessive sweating, moody or an insatiable hunger but these can all be averted by fuelling on the go.

If running up high altitude mountains, your body will also require more carbs particularly when un-acclimatized so you’ll need a few nutrition highs to keep you on the right path.

Unless you want to turn your run into a Sherpa-type carrying exercise, you’ll probably want to fill up as you go. Luckily most mountain ranges have plenty of streams for you to top up those fluids. In the UK as long as they are fast flowing, they should be safe to drink from. If going further afield or unsure, make sure you boil your water or take sterilizing products to avoid going man down.

If you’re running in colder climes, warm drinks are a useful tool for your arsenal to battle against the elements. As well as hydrating, they can be nourishing and help warm you up from the inside not to mention good morale when you’re cold and tired. Hot juice or powdered sports drinks, cup a soups and hot chocolate or a mocha for that caffeine boost are all handy options.

Finally its good practice to carry some emergency rations such as a packet of instant noodles that can be made up with hot or cold water, an energy gel for those low blood sugar moments and a chocolate bar to keep your spirits high should you find yourself out for longer than intended. 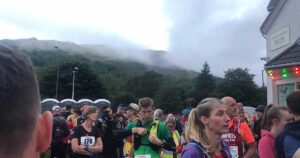 Race nerves and how to cope with them 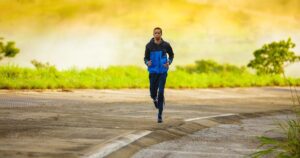 Planning the Training Peak for your Big Race